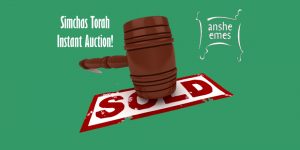 From Now to 2pm September 27 (Hoshanah Rabbah), we are conducting auctions for Simchas Torah kibudim.

Winners will receive an email with a link to pay by PayPal where they can use a PayPal account or a credit card.

This report will be updated roughly once every 2 hours on Sunday between 9am and 11pm and once an hour on Monday between 9am and 2pm.   The easiest way is to bid the most you’d be willing to pay for the kibud you want and if the second highest bid isn’t close, you’ll get a bargain.  You’ll never pay more than your budget.

Updates will also appear on the Anshe Emes WhatsApp group.

2:30pm  BONUS ROUND:  Due to recent bid activity we are extending the auction to 4pm.  There will be NO in-shul bidding.  Kol HaNaarim minimum bid is $360.  Between 4pm and 5pm, anyone can “swipe” an aliyah by doubling the 4pm bid, but only the first “doubler” gets the aliyah.

If you have any difficulty with the form, email your bid info (your name, phone #, what kibud and your bid amount) to webmaster@anshe.org.