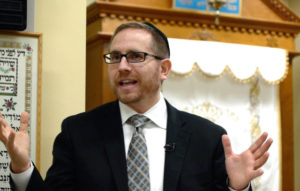 Rabbi Geiger, a native of Southern California, spent several years studying in Rabbinic School in Israel and then in Baltimore. He received his ordination from Ner Israel Rabbinical School, along with a Masters in Talmudic Law. At the same time he earned a Masters of Science from Johns Hopkins University. He served for five years as the assistant rabbi of Beth Jacob of Irvine. While there he was the Irvine NCSY chapter advisor, teacher at Tarbut V’Torah and director of Torah Outreach Program of Orange County, an adult outreach organization. After leaving Orange County, he accepted the post as rabbi of Pacific Jewish Center in Venice Beach, where he was spiritual leader for four years. During that time he taught Talmud, Jewish history and Bible studies at Yeshiva University of Los Angeles. He assumed the position as rabbi of Queens Jewish Center in Forest Hills in August 2008. While in Forest Hills he was principal of Mesivta Torah Ve’Emuna, an outreach high school, and is currently the Rabbinic Supervisor for the Orthodox Union Kashrus Hotline.

Rebbetzin Karen Geiger, a native Angelino, holds a BA in Psychology from University of Maryland Baltimore County and is a certified teacher by the Maryland Department of Education. She enjoys wide acclaim as an educator and a guide in Torah study and personal growth. She brings a gentle and caring touch to the atmosphere she creates in all of her classes. While living in Irvine she was the primary bat mitzvah teacher and director of the Beth Jacob Talmud Torah. During their time in Los Angeles, Rebbetzin Geiger taught Judaica in Moses Hebrew Academy and then English in Torath Emeth Academy. She currently teaches in Bais Yaakov of Queens and directs the Shabbos youth programming at the Queens Jewish Center. In addition, Rebbetzin Geiger teaches kallah classes to both observant and non-observant brides. Rabbi and Rebbetzin Geiger are the proud parents of Mordechai Leib and Ilana Ester.