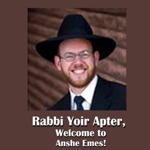 It is with great pleasure that Anshe Emes announces the appointment of Rabbi Yoir Apter to the position of Assistant Rabbi.

Rabbi Apter was born and raised in London, England.  He attended Gateshead Yeshiva after which he came to America to learn with HaRav Elya Ber Wachtfogel at the Yeshiva of South Fallsburg, NY.  In 2002 , following Rabbi Apter’s marriage to Penina (nee Jakobovits, of Baltimore, MD) they settled in Lakewood, NJ, where Rabbi Apter studied in the Kollel of Beis Medresh Govoha and in Beis Hora’ah.

The Apters moved to Los Angeles in 2007, as founding members of Kollel Merkaz HaTorah in Pico-Robertson.  As an avreich of the Kollel, Rabbi Apter has been giving assorted shiurim within the community and many may already be familiar with him.  When Rabbi Apter is not learning or teaching, he enjoys hiking and biking and, of course, spending time with his family.

Rabbi Apter is already working with Rav Summers to expand our already wonderful array of shiurim and programs.  We have asked the Kehilla for their input and have already received many interesting ideas.  Rabbi Apter will also be assisting Rav Summers in other areas besides shiurim, including drashos, overseeing minyonim, and all other aspects of Shul life.  We are excited to be able to add such a talented and outstanding talmid chochom to our wonderful and vibrant Kehilla.

A “Welcoming Shabbos” will be scheduled towards the end of the summer to officially welcome Rabbi Apter and his family to Anshe Emes. We are looking forward to seeing the continued growth of Anshe Emes and the furtherance of Torah in our community.

With wishes for bracha and hatzlacha,
Rabbi Yitzchok Summers