Mr. Carol’s yarzheit (Yaakov Tzvi ben Yitzchok) is 28 Tishrei. He appears in a Dragnet episode in an excellent example of why dan l’kaf zechus is so important.

Mr. Carol also appears running a laundry as an ex-con in an episode of Dragnet called “The Big Betty”, appearing approximately 5 minutes in:

As a Hotel Clerk at 15:10 in the episode “Logan’s Treasure” of Bonanza:

As a pilot at the beginning of “The General’s Boots” in the Schlitz Playouse With Basil Rathbone:

As “Comrade Bill” in I Led 3 Lives: Parcels for Poland. About 3 minutes into the show.   Video no longer embedable:  view here:  https://archive.org/details/ILed3Lives-ParcelsForPoland1953

Don’t blink, but Mr. Carol appears briefly as a security guard named “Scotty” in this made-for-TV horror movie. Skip to 1:24:40. The rest of the movie isn’t much worth watching. 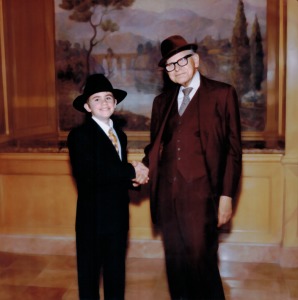